Facebook 'Has Spoken to Visa & Mastercard’ About a Token Launch

Social media giant Facebook appears to be drawing closer to the launch of its own cryptocurrency – and may have spoken to the likes of Visa and Mastercard about its forthcoming token.

Per a report from the Wall Street Journal, unnamed “people familiar with the matter” have confirmed that Facebook is currently “recruiting dozens of financial firms and online merchants to help launch a cryptocurrency-based payments system.”

Facebook has even given its project a secretive codename – Project Libra – per the report.

The report’s authors added that its undisclosed sources had also made the following claims:

Facebook declined to comment, referring to a previous statement that it “is exploring many different applications” of cryptocurrencies.

The new report also backs up a number of claims about the forthcoming token made by New York Times writer Nathaniel Popper last month.

Popper stated that Facebook was looking to launch a stablecoin, with a value pegged to “a basket of foreign currencies.”

The same journalist also stated that Facebook was looking for some USD 1 billion worth of investment from venture capital companies for its project, and earlier said the social media network had already spoken to exchanges about the possibility of listing its coin.

Facebook has been working behind-the-scenes on a range of blockchain-related projects ever since it created a specialized unit for the technology, advertising for a range of specialists, and making aqui-hire moves. However, the company has so far remained tight-lipped on the exact nature of its blockchain plans.
___

Facebook launching its own crypto network will cause mainstream adoption at a scale never imagined before. Huge market catalyst. Market bull signal written all over it.

Plus one might argue $FB could arguably assess the creditworthiness of its user base better than a bank... maybe?

Google could do the same thing $fb $goog

If FB did "bank like services" with it's crypto play... 100x... maybe more as FB knowledge of our social graph would allow for better assessment of "bank like credit scores".

The company that owns our social graph needs to stop behaving like a sociopath. #dystopia

I don’t see FB converting many eyeballs to banking services, particularly the customers that support the $800/yr revenue figure. Trust is essential and they have lost it. 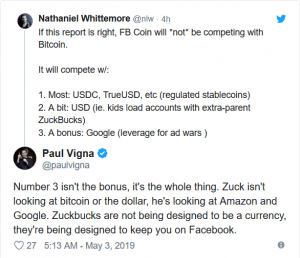